Hydrogen is commonly known as water’s best friend. Hydrogen is produced by many different organisms, including bacteria, algae, and fungi. Artificially hydrogen can be produced from natural gases, oils, coal, and electrolytic processes. Today’s market requires clean and sustainable energy and a wide range of applications. We should be aware of the drawbacks and disadvantages of hydrogen if we are going to produce hydrogen by using different modes of techniques. This short article will be covering 10 disadvantages of hydrogen.

Hydrogen is a diatomic molecule consisting of only one proton and one electron. H2 is the simplest atom in the universe. H2 is the second most abundant element in the universe after helium. Hydrogen is a colorless, odorless, tasteless, non-toxic, flammable, highly reactive, and extremely volatile substance. Hydrogen is the cleanest fuel we have ever seen. However, we need to find ways to produce it efficiently and safely. Hydrogen is a chemical element that occurs naturally in small amounts in many substances. Click here to know more about hydrogen. 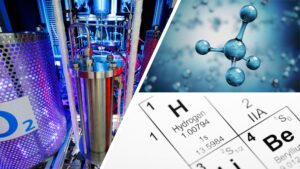 How to produce hydrogen?

Electrolysis is the simplest process to produce hydrogen by using splitting water molecules into oxygen and hydrogen gases. Using electricity, the process of electrolysis separates water into hydrogen and oxygen. The use of electricity to split water is a promising method of producing hydrogen gas. There are different processes of hydrogen production as discussed in previous articles (read here). The success of hydrogen-based stuff such as hydrogen-powered cars, and fuel cells on the market depends on the creation of clean, sustainable, and affordable hydrogen production and generation systems. Before knowing the disadvantages of hydrogen read an article covering seven cutting-edge technological possibilities for clean hydrogen production.

Unlike coal or wind, hydrogen is not an easily accessible energy source.

The process of producing hydrogen necessitates the use of some energy.

The hydrogen-based fuel cell system’s efficiency is lower than when energy is stored in batteries. The relatively high cost of the materials being used in the fuel cell.

The storage of hydrogen fuel cells is far more complicated than that of other types of fuel.

Because hydrogen is a highly volatile and flammable element, extensive safety precautions are required to prevent leaks and explosions.

Hydrogen is firmly bonded to molecules like water and natural gas, making its extraction and purification costly and energy intensive.

Hydrogen gas is a highly flammable and volatile substance due to its high energy content, making it a dangerous fuel to work with.

The only truly carbon-free way to produce hydrogen is to generate electricity for the electrolysis process using solar or wind power (which is not available in some parts of the world).

Because hydrogen is a much lighter gas than gasoline, it is difficult to store and transport.